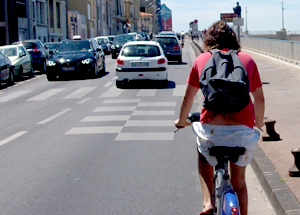 WarmShowers.org and Cyclingbuddy are an excellent pair. Warm Showers is a free worldwide community offering hospitality for cyclists while touring. The site boasts 27,938 members in dozens of countries, a user-friendly app, and a comprehensive site that makes it easy to arrange for free accommodations with fellow cyclo-tourists. Cyclingbuddy interviewed an American, Linsey, who started using Warm Showers on her 2012 summer tour through Europe.